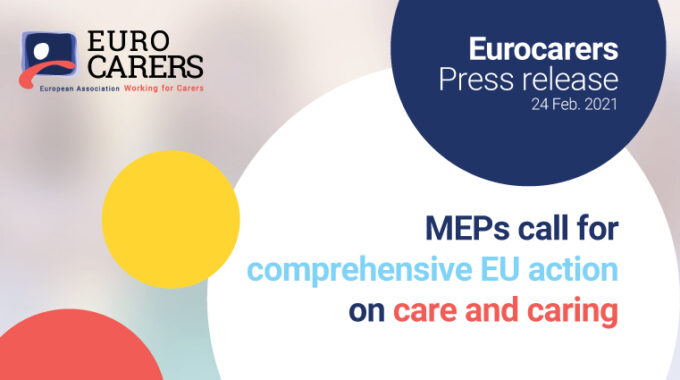 In a meeting of the European Parliament Informal Carers Interest Group held on 23 February, MEPs and other policy makers as well as leading stakeholders agreed on the urgent need for an ambitious and comprehensive EU initiative on long-term care.

The time for such an initiative is right: An Action Programme to implement the European Pillar of Social Rights (which has a clear reference to the right to long-term care) will be adopted under the Portuguese Presidency; the European Parliament has a clear focus on care provision; and many representative organisations, active in the care domain, are stepping up their advocacy activities, speaking out on the need for EU action on care and caring.

As some 80% of all long-term care in Europe is provided by family, friends and neighbours, the Informal Carers Interest Group – coordinated by Eurocarers, the European Association working with and for informal carers – has been advocating a comprehensive EU Carers Strategy since 2013. Without the unpaid contribution of informal carers, health care and long-term care systems would be unsustainable – they would simply collapse.

“It is not normal for a majority of member states to rely primarily on families, friends and neighbours for the provision of long-term care, and this with very limited support.” said Eurocarers Director Stecy Yghemonos.

This was echoed by Interest Group co-chair Marisa Matias, stating that the current situation “raises important questions regarding universal access to care and calls for a more sustainable balance between formal and informal care in Europe”.

Dedicated support is required to improve the situation of informal carers. “We need a European Informal Carers programme, acknowledging the different forms of informal care and carers, taking account of the right to self-determination of those being cared for, setting criteria for receiving social and support services for carers and guaranteeing work-life balance” co-chair Sirpa Pietikäinen MEP said.

The meeting provided an opportunity for MEPs Dennis Radtke and Frances Fitzgerald to introduce participants to the current EPP plans on a proposed Care Strategy for the EU, which will address care and caring across the board; better data collection, gender equality, employment and care and social rights will all be addressed by this initiative. In addition, representatives of the European Commission and Portuguese Presidency confirmed that an Action Plan to bring the European Pillar of Social Rights to life will be adopted during the term of the Presidency.

Stakeholders, representing organisations of older people, care service providers, trade unions and many other social areas, voiced their priorities in the area of long-term care and underlined the need for the EU to ensure fair, sustainable and high-quality long-term care across the EU.

In conclusion, Luke Ming Flanagan MEP stated that “it is high time the EU equipped itself with a clear strategy and set of objectives on the future of our care systems, the role of individuals and the political collective.“

A full meeting report will be available soon.