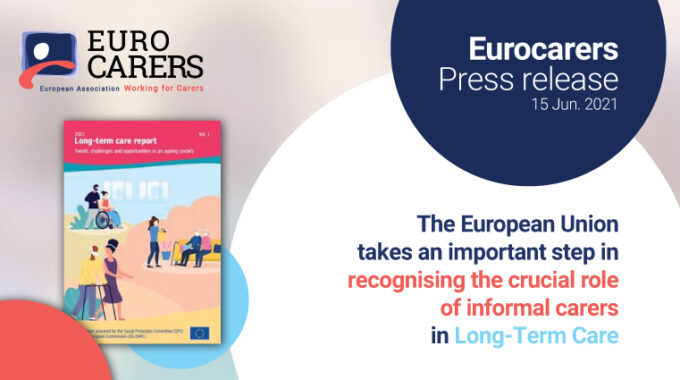 Eurocarers warmly welcomes the adoption of key conclusions on Long-Term Care (LTC) by EU ministers for employment, social affairs and health. These conclusions clearly recognise the vital contribution of informal carers to LTC provision as well as their need for adequate support. We are confident that they will help pave the way for a much-needed and ambitious EU Strategy on LTC, addressing both formal and informal care in Europe.

During its meeting yesterday, the EPSCO Council endorsed the joint Social Protection Committee/European Commission (DG EMPL) Report on Long-term Care, which provides a comprehensive and detailed overview of the common challenges faced by Member States in the area. The report is not only a timely reminder that much remains to be done to address the growing care needs of an ageing population, it is also an important step in the recognition of informal carers.

Eurocarers particularly welcomes the thorough analysis of their role – defined in a broad sense – as an essential component of the LTC ecosystem, which acknowledges the strides made since the previous SPC/EC report on LTC in 2014. “All of the issues we have repeatedly highlighted in the last few years are well captured in the report, notably the negative impact of informal care on carers’ health in the absence of adequate support and the difficulty of combining paid work with caregiving” said Stecy Yghemonos, Eurocarers’ Director. “Importantly, the gender dimension of informal care is examined from various perspectives and so are the gaps in carers’ social protection, for example as regards their pension rights. The realisation that measures to better support informal carers should go hand in hand with measures to reinforce formal care is perfectly in line with Eurocarers’ vision”.

“The report is an important stepping stone for our work and I would encourage the EU to go further in understanding and supporting informal carers”, said Sari Tervonen, Eurocarers’ President, referring to the need for more data on the situation of carers. “It is essential to research the specific needs of carers of all ages and socio-economic groups in order to identify possible multiple disadvantages, and develop analyses from a life-course perspective. For instance, the mental health risks of informal care remain in the blind spot of prevention measures and should be given more attention. Informal carers should have a chance to play an active role in the design and implementation of policies that influence their daily life, from health and pensions to housing and transport” she insisted.

Eurocarers very much looks forward to contributing to future discussions on the many issues highlighted in the report and stands ready to cooperate with the European Commission in the implementation of its conclusions and preparation of the initiative on LTC announced for 2022.