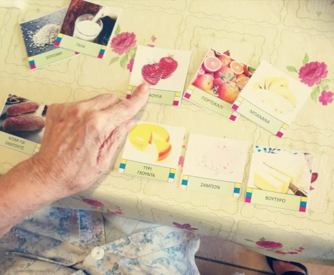 The Erasmus+ funded “Bridge” project that aims to create serious games acting on dementia symptoms is now in its central phase. The consortium is pleased to announce that 8 games, acting on cognitive and behavioural symptoms of dementia, have been created and ready to be tested. These games, 4 physical and 4 digital, have been designed and produced by the project consortium, based on the concept ideas of health professionals, game-designers, young volunteers, people with dementia and their carers coming from Greece, Italy and Romania.

The games will be tested during a series of workshops that will see the involvement of at least 10 people: people with dementia, their carers, health professionals and young volunteers. The workshops aim to enable social inclusion of people with dementia by being actively involved in games that can stimulate their cognitive functions. Participants will have the chance to play with fun, enhance their mood and challenge themselves to master new skills. The workshops, and Bridge project itsef, aim to bridge intergenerational gap, break the stigma related to the disease and increase volunteering actions concerning 3rd age people.

During the workshops people with dementia and their carers, along with young volunteers and health care professionals, will have the chance to spend time together testing the games created within the project. Each workshop will last two hours, and 2 different games will be presented and played. At the end health professionals will collect feedbacks about the workshop and the games in order to highlight possible benefits and difficulties encountered.

As soon as possible, taking into account the pandemic evolution, 8 workshops will take place in each country, Greece, Italy and Romania, until October 2020.