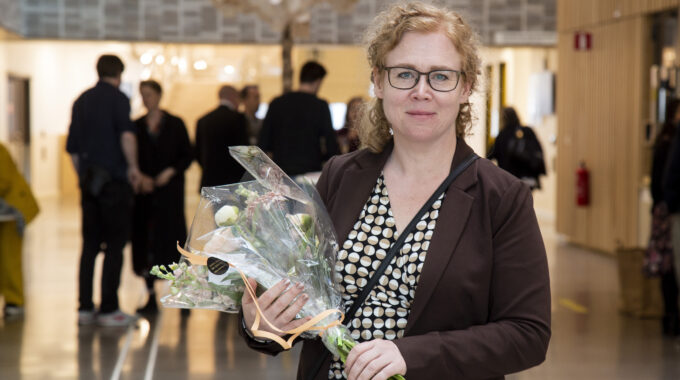 On June 3rd, Camilla Malm, doctoral student at Linnaeus University in Sweden, successfully defended her thesis entitled, “Involving informal carers in health and social care research”. The aim of the thesis was to gain a deeper understanding of informal carers’ involvement in research from the perspective of informal carers themselves and from a researcher perspective.

The findings revealed that age, gender, ethnicity, health, and educational level are aspects that influence whether informal carers become involved in research or not. Informal carers also have a rather unique position, where they represent both themselves and their care recipient. In addition, they provide care, at the same time as they may have their own needs and preferences for support.

In the first study, informal carers were interviewed based on their experiences of being involved in the preparatory work of the Swedish national carers strategy. The findings highlighted the complexity of carer involvement in research and development work and that it includes more aspects than citizen participation in general.

The study developed a framework (CRAC – Community, Reciprocity, Advocacy and Circumstantiality) with the aim of making it easier for researchers to understand and interpret carers’ needs and prerequisites for participating in research and development work.

– The framework can be used as an inspiration for those who are planning on involving informal carers in research and development work in a more systematic way. It can create greater preconditions for a successful involvement process, which in turn increases the possibility of a meaningful result, says Camilla Malm.

The second study examined informal carers’ motivations for and views on participating in research and development work. In this study, 147 carers participated in a larger survey conducted in the UserAge research programme. The results showed that the majority of the respondent carers were interested in research and in being actively involved in research. However, the motivation varied among the respondents and could be divided into two categories: “Greater good motivation” and “Family motivation”. This means that some carers may be driven to engage in research to improve the situation of carers in general, while some hope that the research will benefit their own or their care recipients’ situation in some way.

Older carer were less interested to participate in research

The results revealed that older carers were less interested in participating in research. Lack of time, a strained everyday situation and lack of energy were some of the mentioned obstacles. The carers’ own health was also a frequently reported reason for declining to take part in research. This shows that there is a risk that some groups of informal carers seldom or never get the opportunity to make their voices heard, means Camilla Malm.

– Researchers need to be aware of informal carers’ divided motivations to participate in research and that they experience various obstacles. By only involving carers who are relatively easy to get in contact with, there is a risk of creating research and initiatives that only suit a certain group of carers, she says.

The third study explored what type of knowledge informal carers refer to when they participate in different research projects. The material was collected through group discussions with carers who combine paid work with providing care or support to someone.

The results showed that informal carers’ knowledge is complex. They have their own experiences of being carers, but also expert knowledge, and strategies for maintaining a greater sense of security in contact with health and care professionals.

– It is important that researchers who involve informal carers in their work are aware of and accept that carers’ knowledge contributions go far beyond their personal experiences. Carers should be regarded as competent participants in health and social care research, says Camilla Malm.

Overall, the findings revealed that carer involvement in research requires a high level of commitment from everyone involved. It is important that researchers recognise that the motivation of informal carers to engage in research varies and the researcher should adapt their recruitment methods accordingly.

Camilla argues that by involving and doing research together with carers, it is possible to increase the general level of understanding of informal carers’ situations and to develop meaningful support interventions.

– An important message that I would like to send to politicians and other decision-makers is that research with participation of carers and development of support interventions is not primarily needed for the carers to be able to provide more or better care, but for them to have tools to make their own choices and be able to live a good life, says Camilla Malm.