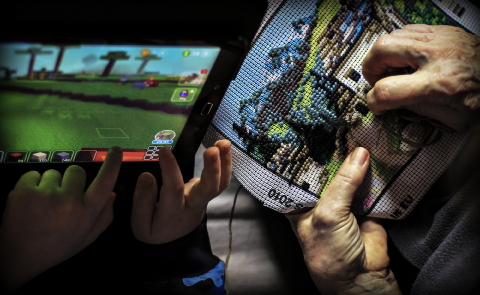 “I tell you from my own experience; it’s hard to take care of someone 24 hours a day. What can I tell you, this is life.” These are the words of a 66-years old informal carer from Ajdovščina (Slovenia) who took care of her mother-in-law who was a person with dementia and was receiving care at her home.

Such and other similar were confessions and stories from Slovenian informal carers of people with dementia which ZDUS (Slovene Federation of Pensioners Associations) collected in the past month for the European project Move your hands for dementia. A project funded from the Erasmus+ programme and which seeks to supports adult educators in extending competences on educating the community about dementia health literacy. The project will offer an opportunity for an open and distance e-learning to improve knowledge and competences about dementia, thus giving skills and concrete opportunities for communities, carers and people with dementia.

ZDUS, partner to the project, completed a series of 10 interviews with informal carers of persons with dementia. The fact that all interviewees were women is not surprising at all, as we are aware that the vast majority of carers in EU are women and that overall women commit more time to caregiving than men. The carers we talked to were also volunteers of the ZDUS social-care programme Older people for better quality of living at home, were retired people volunteer to help the seniors aged 69+ in their communities. Our interviews revealed that in most cases these informal cares were caring for a family member with dementia and some for their neighbours in the community. The majority said that they could perform such care duties because they were already retired, with more time and that if they were still in their active working period, this would not be possible. The carers also emphasized that everybody who is in care contacts with older people should know more about dementia, have more skills to recognize the first signs and have more practical knowledge on how to conduct a conversation with a person with dementia. Some carers said that the worst part is when family members, acquaintances and friends move away from the person with dementia, stop visiting them because of their own fear from the unknown and because they simply don’t know how to approach a person with dementia, their old friend.

“At her house they simply wouldn’t accept that she was developing dementia. /…/ suddenly or step by step everything was changing, disappearing. And it’s hard to accept it and I feel there is certain pain within the family … and on the other side there is that acceptance of your own helplessness that you actual can’t help the person (with dementia). I think that accepting dementia is a big problem.” These are the findings of informal carers who say that families embrace change with their loved ones in different ways. They believe relatives, caregivers and all those involved in caring for people with dementia need to be helped to cope and accept the situation, and empowered with other peoples experiences and ways to improve the lives of both people with dementia and their own lives as carers: “You know the hardest part is when people and families start to hide that somebody has dementia, because they feel embarrassed … This is hard to deal with,” they stated. But the project Move your hands for dementia believes dementia health literacy and building on communication skills for example can make a difference: “I found out that if you are nice to the person (with dementia), if you don’t deny what they are saying and you try to talk to them in words they follow and seem to understand … this is the way to go. /…/ Carers of people with dementia often forget that such people forget things, but their emotions are still deep within them. Maybe they don’t know how to talk the right way anymore, maybe he doesn’t know or recognize things anymore, but his feelings are still there. So, we need to treat them with care, talking nicely, slow and easy and in many times a touch can do wonders.”

These words of a 82-year old informal carer from Ptuj (Slovenia) who took care of her husband with dementia should make us think that as a society we should not withdraw from people with dementia, on the contrary, we should try to make them live a quality life as long as possible by visiting them and supporting all those who care for them, you would be surprised what amazing life energy these carers have, as we found out in our interviews.