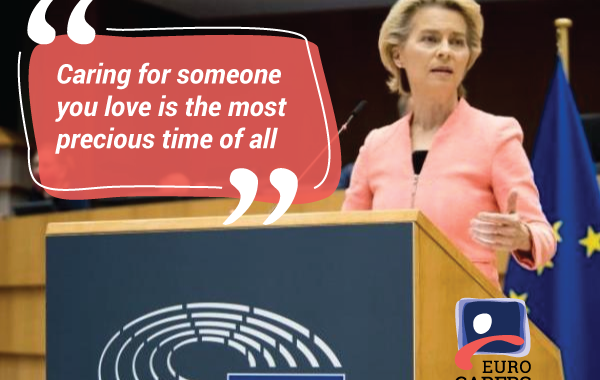 In her State of the Union address on 15 September 2021, President of the European Commission Ursula von der Leyen announced a new European Care Strategy to be put forward by the Commission.

This new Strategy, forming part of the overall implementation of the European Pillar of Social Rights, will “support men and women in finding the best care and the best life balance for them” – she stated,  stressing that “caring for someone you love is the most precious time of all.”

As we understand, the announced Strategy will address both formal and informal provision of health, social and long-term care across the European Union, in line with Eurocarers’ promotion of a comprehensive approach to care, centered around people needs and preferences, and responding to the call issued by the Informal Carers Interest Group earlier this year.

While the Commission committed already last March to propose an “initiative on Long-Term Care in 2022 to set a framework for policy reforms” as part of the Social Pillar Action Plan, the announcement of a Care Strategy demonstrates a much higher level of ambition and political willingness. Eurocarers welcomes such commitment which certainly addresses people’s concerns, and awaits with great expectation to read more details in the Commission 2022 work plan to be unveiled next month.

In the meantime, Eurocarers remains actively involved in discussions paving the way to EU action in the area of care, via our Partnership Agreement with the European Commission, our role as Secretariat of the Informal Carers Interest Group, and the various EU funded projects we are involved in.

Statement of the European Parliament Informal Carers Interest Group, April 2021  ‘The Social Pillar Action Plan: the basis of a comprehensive EU Strategy on Care and Caring’