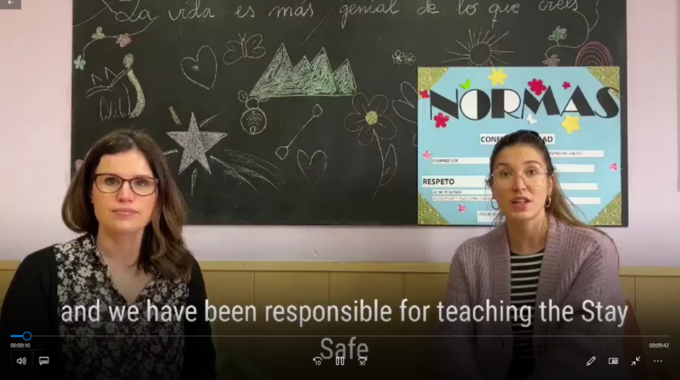 Concluding two years of intense work, creation and cooperation, the final international conference of the Stay Safe project took place on March 17. The event, virtually hosted by the Eurocarers, gave the opportunity to more than 60 health professionals and stakeholders to discover concretely the tools developed during the project, and learn about the results of the experimentation in five countries (Greece, Italy, Lithuania, Portugal, Spain). I was also the occasion to discuss the status of the fight against gender-based violence perpetrated against women with psychosocial disabilities, a few days after the European Commission proposed EU-wide rules to combat violence against women and domestic violence, with representatives of the European Commission, and key European civil society organisations, the European Women’s Lobby and the European Disability Forum.

“The Stay Safe project immediately presented itself as a great challenge: because of the subject matter, still little known and in many cases considered taboo, and because of the pandemic context in which most of the activities were carried out,” says Licia Boccaletti, project coordinator, “Despite this, the entire partnership has been strongly committed to overcoming these obstacles and it is with pride that today we present the result of our work, with the hope that it will help many European women with disabilities and the professionals who work to support them.”

The material of the Stay Safe project is now open access and can be used and disseminated.

All material is available on the Stay Safe website (https://staysafeproject.eu/outputs/ ). If you are planning to use it, keep us informed by sending an email to progetti@anzianienonsolo.it or using the hashtag #staysafe_euproject

The prevention of violence is in our hands, only by committing ourselves to raise awareness and training on the issue we can hope that one day we will not talk about gender violence anymore!

The first report elaborated within Stay Safe analyses the incidence and forms of sexual violence and harassment against women with disabilities in Italy, Greece, Lithuania, Portugal, Spain as well as in the European Union as a whole. Data have been collected through a literature search, analysing statistical reports and scientific researches; moreover, a field survey has been carried out, interviewing women and professionals in the field to collect their point of view.

Following the elaboration of a training course focused on offering the tools to recognize, prevent and combat sexual violence against women with psychosocial disabilities, as well as the experimentation carried out during the project, a manual was drafted to implement the training program, aimed at professionals in the social, health and violence prevention fields. The manual contains the “toolbox” developed by the partnership, i.e., a set of theoretical elements and training activities that allow professionals to deepen and replicate the Stay Safe program.

ONLINE COURSE FOR PROFESSIONALS WORKING WITH WOMEN WITH PSYCHOSOCIAL DISABILITIES

The training program, in its most theoretical part, has also been made into an e-learning self-study course, available in English, Italian, Lithuanian, Greek, Spanish and Portuguese.

The generation of content aimed at providing greater awareness and knowledge on how to prevent and combat sexual violence has not only been addressed to professionals but has also been developed training material directed to women with psycho-social disabilities. Thus, four videos were designed to show women with disabilities how they can react to sexual harassment (both online and offline) and episodes of violence.

Concretely, these videos talk about

They are also accompanied by a small guide, directed at professionals in the field, aimed at giving instructions on how to use the material.

The Stay Safe short documentary provides an additional awareness-raising resource on the issue of sexual violence against women with disabilities. It brings together the voices of women and professionals who work with them on how to prevent and combat sexual violence. The documentary is available in English, Italian, Lithuanian, Greek, Spanish, and Portuguese (by activating subtitles) here.