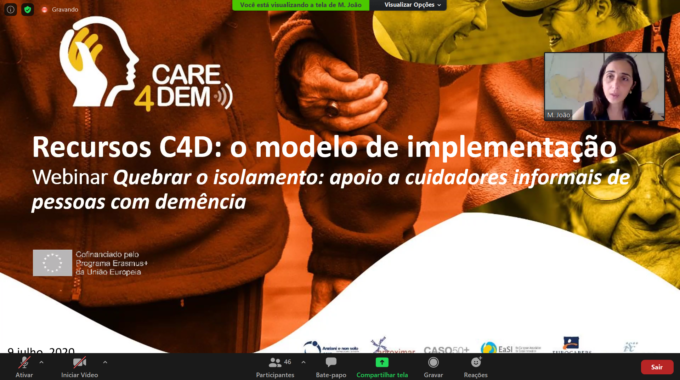 The online webinar in Portugal took place on July 9 under the Care4Dem project. The event was organized by both Portuguese partners: Aproximar and CAS050+. We are happy to say that it was possible to reach many professionals since a total of 85 people filled the registration form / showed interest in the event. The webinar lasted approximately 2 hours and 52 people attended: from informal caregivers, organizations working with and providing care to people with dementia, students, and other professionals from City Council, Cooperatives and Social Centers.

The Webinar presented the main resources from Care4Dem project, compiled in the Implementation Guide of Web-based Mutual Aid Groups. There was also a round table with Cas050+ as service provider, one facilitator and the prospective input from the National Association of Informal Caregivers. The discussion showed the added value of interventions like Care4Dem, but also raised awareness on further opportunities to promote the value of informal carers.

We would like to thank all the people who joined the Webinar. In particular, Nélida Aguiar and the National Association of Informal Caregivers, CAS050+ Association and the facilitators who gave their testimony.