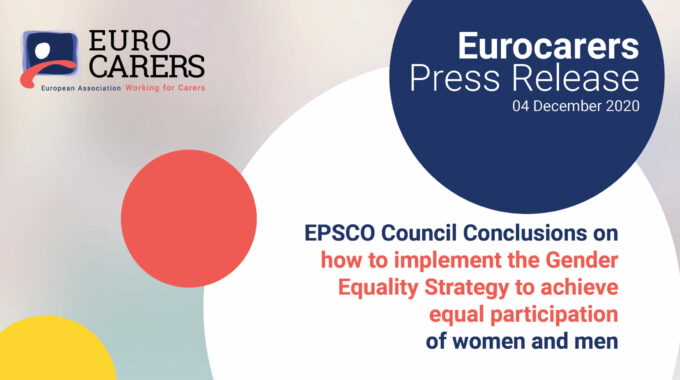 “To achieve gender equality, the European Union should launch an ambitious initiative on long-term care”

Eurocarers welcomes the adoption of conclusions on “Tackling the Gender Pay Gap: Valuation and Distribution of Paid Work and Unpaid Care Work” by EU ministers of employment and social policy this week. We appreciate in particular that ministers stressed “how indispensable paid and unpaid care work is for economic stability as well as for the continued functioning and well-being of our societies” and agreed on the need to enhance the status of care work “whether paid or unpaid”. Their  willingness to address the gender care gap, duly identified as an ”underlining cause behind women’s lower participation in the labour market”, including through improving the availability, accessibility, affordability and quality of long-term care services, is to be commended

Eurocarers, the European civil society network working with and for informal carers, has been calling for EU initiatives to support informal carers for a number of years, convinced that it can have a tangible impact for this vulnerable group whose role is so crucial, and to demonstrably improve the lives of 12% of the total adult European population[i].

Informal carers, according to research, provide over 80% of all care in Europe, with women providing approximately two-thirds of care. Their contribution is essential as our long-term care systems would not have the capacity to address the entirety of the need for care in the EU, in particular in the current context of demographic change. However, working carers face a series of difficulties, in the first place the conciliation between their role as carer and their responsibilities in the work place. Though the adoption of the Work Life Balance Directive last year, introducing new rights for carers, can arguably be considered a breakthrough, much remains to be done.

“Informal care responsibilities, when not adequately supported, not only hinder career opportunities, but also access to education and life-long learning, adequate income and pension, and have a detrimental impact on carers’ health and well-being” – declared Stecy Yghemonos, Eurocarers’ Director. “The impact of the COVID-19 pandemic has dramatically exacerbated the challenges carers face, though they only received very limited targeted support during the crisis, reflecting the lack of recognition and invisibility of informal carers in our societies” – he added.

Building on the expertise of its membership across Europe, Eurocarers has brought to the debate a series of recommendations on how to enhance the Social Rights of Informal Carers, as part of the implementation of the European Pillar of Social Rights. Eurocarers promotes the development of carer-friendly societies across Europe, in which informal carers are recognised and supported while their free choice and personal autonomy is preserved. At a time when evidence shows that a minimal fraction of EU funds is used for developing long-term care and active ageing[ii], it is urgent to initiate an ambitious legislative initiative on long-term care at EU level whereby member states commit to upward convergence in the provision of accessible, affordable qualitative person-centred services, with a focus on home and community care. “Such an initiative should foresee a governance process along which all stakeholders at EU, national, regional and local level, including informal carers, are involved” – he concluded.

The adopted Council’s Conclusions  on “Tackling the Gender Pay Gap: Valuation and Distribution of Paid Work and Unpaid Care Work”are accessible through the Council website : https://www.consilium.europa.eu/en/press/press-releases/2020/12/02/tackling-the-gender-pay-gap-the-council-approves-conclusions/

They build on evidence gathered in the report commissioned to the European Institute for Gender Equality on “Gender inequalities in care and consequences for the labour market” available through the EIGE website: https://eige.europa.eu/news/more-equal-sharing-care-would-reduce-workplace-gender-inequality

The document “Enhancing the Rights of Informal Carers – Eurocarers’ Response to the Consultation on the Social Pillar Action Plan” is available through the Eurocarers website : https://eurocarers.org/publications/enhancing-the-rights-of-informal-carers/

See also Eurocarers publication ‘Enabling carers to care – A Strategy to support and empower informal carers across Europe’ as well as its accompanying explanatory note, available through the Eurocarers website: https://www.eurocarers.org/EU-Strategy-to-support-and-empower-informal-carers-across-Europe

For more information about this or other initiatives led by the Eurocarers network, please contact Stecy Yghemonos at sy@eurocarers.org