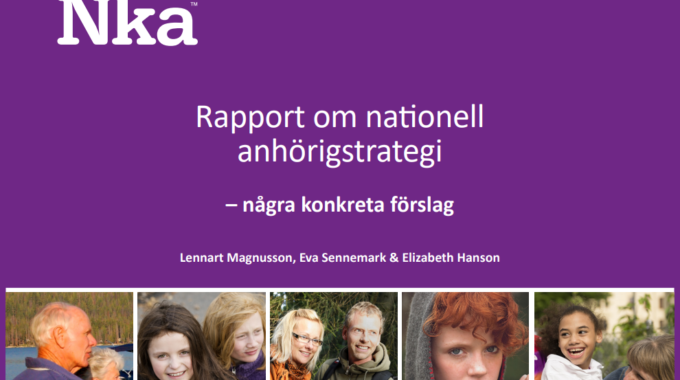 The National Board of Health and Welfare Sweden (NBHWS) was commissioned by the Ministry of Health and Social Affairs to lay the foundation for a National Carers Strategy. The newly published report focuses, in the first instance, on informal carers of older people. A second report due in the Summer next year will focus on the other major carer groups. In carrying out the remit, the NBHWS has collaborated with the Swedish Family Care Competence Centre (SFCCC) and the Swedish Association of Local Authorities and Regions (SALAR), together with Carers Sweden and other civil societies and relevant stakeholders. The report was published on Tuesday 1 December.

In the Autumn 2019, the NBHWS was commissioned by the Ministry of Health and Social Affairs to provide the data for a national strategy for informal carers who provide help, support and/or care to an older relative or significant other. The remit included producing an analysis about what a carer perspective actually means for informal carers themselves, older people and health and social care professionals, and carrying out a mapping exercise and an analysis of the extent to which an informal carer perspective is included in the operationalisation of existing regulations. The background to the commissioned work is an earlier report published by SFCCC (2018) with proposals for the content of a national strategy for informal carers,  informed by the Eurocarers EU wide strategy and summary findings from focus group interviews with carers and their organisations and other key stakeholders across Sweden. This together with the active lobbying work of Carers Sweden helped pave the way for the work with a National Carers Strategy in Sweden.

On Tuesday 1 December 2020, the National Board of Health and Welfare published the report “Informal carers who provide help, care and/or support to older relatives or significant others – the basis for a national strategy”.

Informal carers account for a large part of the care for older people in Sweden today and it’s important that their efforts and needs are given the attention they deserve. When informal carers are made invisible, when they do not receive support to handle their situation or when they are unable to choose to what extent they give help to their next of kin there is a risk that the informal care tasks will have negative consequences for their own health, finances and everyday life. The situation of informal carers is thus a public health issue.  In this report, the National Board of Health and Welfare Sweden highlights areas in health and social care for older people where an informal carer perspective needs to be strengthened, says Karin Gavelin, investigator and project leader for the commissioned work.

In the report, the NBHWS writes that informal carers have three overall needs and preferences:

Informal carers’ situation – a public health issue
Giving care and support to a relative or significant other can have negative consequences for the informal carer´s health, work, finances and everyday life. The situation of the informal carer can therefore be seen as a public health issue. In the long run, the negative consequences for the individual informal carer can also have effects on a societal level, for example in the form of increased health and social care contacts, reduced tax revenues and unequal living conditions. The report states that support for informal carers should be offered in good time, in different ways and preferably on repeated occasions. Health and social care professionals often come into direct contact with informal carers and they have an important role to play via providing information and carer support. The situation of informal carers should be clearly integrated into the health promotion and prevention work of municipalities and regions.

The main features highlighted in the NBHWS’ report are the following:

The NBHWS write in the report that it is important that the forthcoming strategy is designed in a way that not only takes into account the informal carer´s opportunity to participate in care and support of their relative/significant other or to receive support, but also protects the informal carer´s right to choose if and to what extent they give care and support to the next of kin.

In carrying out the assignment, the NBHWS collaborated directly with the Swedish Family Care Competence Centre (SFCCC) and Swedish Association of Local Authorities and Regions (SALAR) together with Carers Sweden and other civil society organisations and stakeholders. Lennart Magnusson, director of Nka, and Elizabeth Hanson, Scientific leader of Nka, warmly welcome the report.

It’s very gratifying and important that this report is now published. It’s another important step forward in developing effective and good support for informal carers.

Here you can read the National Board of Health and Welfare’s report (In Swedish): https://www.socialstyrelsen.se/globalassets/sharepoint-dokument/artikelkatalog/ovrigt/2020-11-7045.pdf

Nka:s report of the national strategy for informal carers (In Swedish): http://anhoriga.se/Global/St%c3%b6d%20och%20kunskap/Publicerat/Rapporter/Dokument/RapportNationellAnh%c3%b6rigstrategi_201908fv.pdf