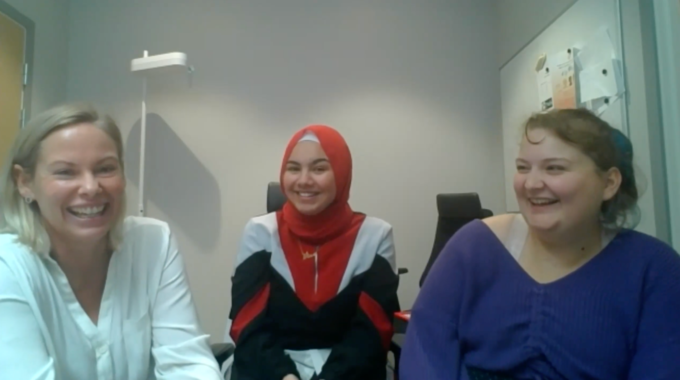 On the 6th of October, Nationellt kompetenscentrum anhöriga (The Swedish Family Care Competence Centre) organized a webinar to celebrate the second European Carers Day. Since the theme of this year’s European Carers Day was young carers, Nka’s webinar focused on how we can work to increase awareness of young carers and both strengthen the support and help empower children and teenagers who take care of a family member or friend with health and/or care needs.

The webinar consisted of several presentations and the moderator of the webinar was the tv-host, journalist and author Mark Levengood. Mark Levengood has been a Swedish ambassador for Unicef for several years and has personal experience of being a carer. He started the webinar by welcoming all the attendees.

– Very welcome to all of you. Carers day has been celebrated in Sweden since 2005 and this is the second year that we also celebrate European Carers Day. These types of questions will be more central since we live in a world where our loved ones are in need of more support since we are getting older and older.

The first presenter of the day was Agnes Lundström who works at the National Board of Health and Welfare in Sweden. She told about the Swedish government’s mission towards strengthening and developing support for young carers. Compared with ten years ago, more children and teenagers are getting support today – but far from all children are noticed. Therefore, long-term and continuous efforts are needed, said Agnes Lundström.

Lennart Magnusson, Director of Nka and Associate Professor at Linnaeus University giving the presentation for Francesca Centola of Eurocarers, then talked about young carers in the EU and about how Eurocarers work to advance policy and practice for and with young carers. He stated that young carers are still too often invisible to policymakers and service providers and that they need to be recognized.

This was followed up by presentations from Elizabeth Hanson, Scientific Leader of Nka and professor at Linnaeus University, Johanna Miranda Sköld, practitioner at Nka, and Miriam Svensson, practitioner at Nka, who told about the Eurocarers consortium, EU Horizon 2020 research and innovation project -ME-WE that started in 2018 and ended this summer. Elizabeth Hanson introduced the project and explained that the aim of the project was to mitigate the risk factor of being an adolescent young carer and to promote their mental health and wellbeing. Youths in the ages of 15-17 are in a transition phase between being children and adults and need to support to be able to handle their caring situation and feelings.

– The project is extra important since it’s the first large scale programme that demonstrates the importance of preventive measures for and with young carers, said Elizabeth Hanson. 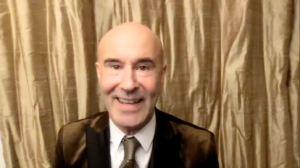 Johanna Miranda Sköld then talked about the ME-WE model and the ME-WE group sessions. The project has developed different tools that can be useful for young carers and adolescent young carers to promote their mindfulness skills and strengthen their resilience. Young carers were invited to take part in physical and digital group meetings where they had the possibility to meet others with similar experiences. The project has also developed a mobile app, which Miriam Svensson presented during the webinar. The purpose of the ME-WE-app is that young carers should be able to get support at distance. In the app you can read about young carers rights, get information about diseases and diagnoses and find information about where you can get support. It’s also possible to chat with others who have downloaded the app.

One of the ME-WE groups was held in Oskarshamn, a municipality in southeast Sweden. At the webinar, the group leader and two of the young carers who participated in the group sessions shared their thoughts about the ME-WE-groups. The adolescent young carers were very positive and explained that they had learned a lot during the group sessions. They didn’t feel as alone as before and felt that it was nice to meet others with similar experiences. They also thought it was good that the focus was on their feelings and well-being and not so much on their situation at home or outside of the group.

The experiences from the young carers mirror the results of the ME-WE-project. Elizabeth Hanson explained during the webinar that the ME-WE model has the potential to contribute to the well-being of young carers. The model enables young carers to deal with stressful situations and negative thoughts. Most of the young carers who participated in the group sessions had a positive experience. They do not feel alone in the same way as before and have learned not to be so hard on themselves.

The Swedish Family Care Competence Centre and Linnaeus University will now offer training, help with implementing ME-WE groups, instruments for systemtically following up and evaluating the effects of the groups on participant young carers and learning networks to all municipalities and organizations across Sweden that would like to work with the ME-WE model.

The webinar was recorded and published on Nka:s website: https://anhoriga.se/stod-och-kunskap/webbinarium/webbinarier-2021/europeiska-anhorigdagen-webbinarium-om-barn-som-anhoriga/