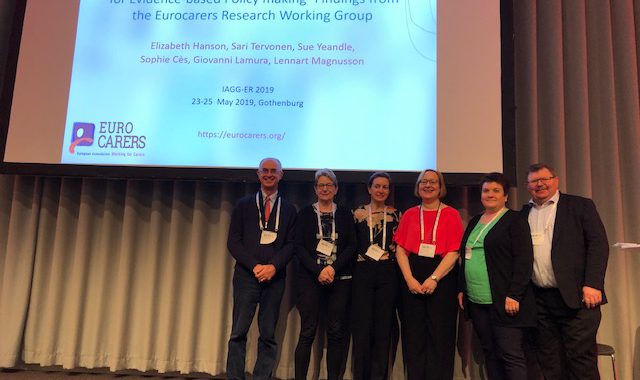 Several members of the Eurocarers Research Working Group held a Eurocarers symposium at the recent International Gerontology and Geriatrics European Region Congress 2019 that was held on 23-25 May in Gothenburg, West Sweden. The symposium was entitled, ‘Towards carer-friendly systems in the European Union: the EU Pillar of Social Rights as a Framework for Evidence-based Policy making- Findings from the Eurocarers Research Working Group’.

Elizabeth Hanson, VP-Research for Eurocarers, chaired the symposium and introduced the session by outlining that the symposium focused on current policy and examples of research from several members of our ERWG which aims to strengthen the evidence based for more carer friendly systems in Europe. All five short presentations were framed within the context of the EU Pillar of Social Rights endorsed by the European Parliament, the Council of the European Union and the European Commission in November 2017. Elizabeth highlighted that the Social Pillar brought back a welcome social dimension of the union back on the EU policy agenda providing new and more effective rights for citizens. She also explained that the symposium was structured around two principles that act as key entry points for the group’s work, namely long term care (LTC)  and work life balance (WLB).

Firstly, Sari Tervonen, newly elected President of Eurocarers and Executive Director of Carers Finland,  with the title ‘ Promoting the needs and added value of informal carers across the EU-  time for a comprehensive EU Carers’ Strategy’, presented the EU policy context which helped to set the scene for the subsequent presentations.

Second, on the theme of long term care, Elizabeth Hanson, Research Director of the Swedish Family Care Competence Centre, gave a presentation entitled ‘Quality of Care from a Carer Perspective’, which highlighted findings from a recent commissioned study by the Swedish Ministry of Health and Social Affairs which formed part of the work with a National Plan for Care for Older People.

Third, on the theme of both LTC and WLB, Sue Yeandle, Professor at the University of Sheffield, UK  and Director of the Centre for International Research on Care, Labour and Equalities (CIRCLE), focused on ‘Sustainable Care  Relationships in Long-Term Care: Work-Life Balance Policies and their Impact on Older People’s Caring Networks’ which was set in the context of a major English Social Research Council funded international research programme, ‘Sustainable Care- connecting people and systems’.

Finally, on the theme of new technology within LTC and how it may help WLB,  Giovanni Lamura, Senior Scientist at the Italian National Centre on Health and Science on Ageing focused on  ‘ The Role of Technology to help Carers of Older People in their Everyday Lives: Findings from the European project Apps4Carers’.

Following questions from the audience, Lennart Magnusson, symposium co-chair, gave some concluding remarks, emphasizing the core themes of the presentations as important elements for a sustainable future with a good health, welfare, care and support for older people and their carers.